Youth in the Hands of God Searching for Knowledge [Aluminum] 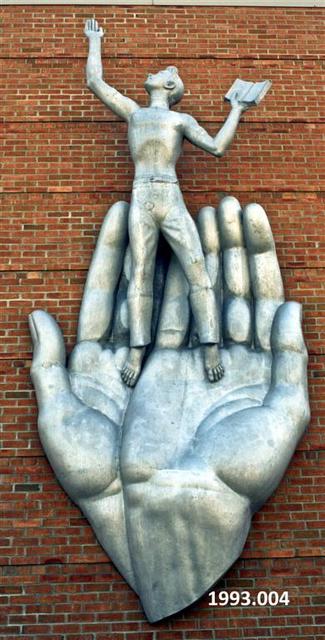 Youth in the Hands of God Searching for Knowledge [Aluminum]

This is the only surviving portion of the full-scale plaster original model for YOUTH IN THE HANDS OF GOD, a twenty-foot tall aluminum cast commissioned for the facade of the Dallas Public Library. This fragment is less well preserved than many of the original plasters in the Museum. Note the stained discoloration across the head in general; also the restorations around the eyes, ears, and lips where wet plaster was added and worked about 1987 to regain the original appearance. The complete aluminum cast of the YOUTH IN THE HANDS OF GOD was relocated from Dallas to the Museum in 1993 and is installed on the facade of the Arbury Fine Arts Center.