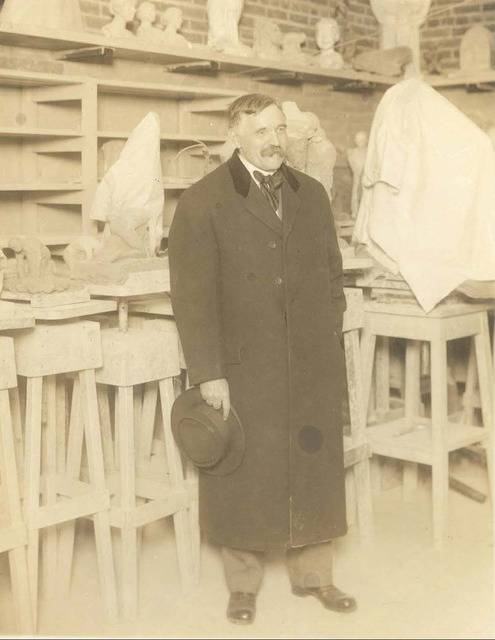 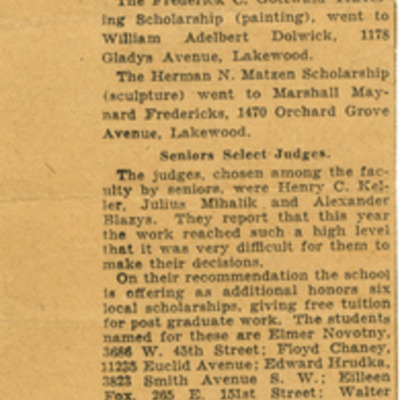 Born in Denmark, sculptor Herman Nicolai Matzen grew up in Detroit, attending the city's German-American Seminary and studying wood carving in the workshop of Julius T. Melchers. He returned to Europe to complete his art studies at the Royal Academy of Fine Arts in Berlin. His work includes the monumental sculptures of Cain and Abel at the Lake County Courthouse in Painesville, Ohio; Commodore Oliver Hazard Perry Monument in Wade Park, Cleveland, Ohio; the Moses and Pope Gregory IX sculptures on the exterior of the Cuyahoga County Courthouse; the Schiller Monument in Detroit; and the War and Peace Group for the Indianapolis, Indiana Soldiers and Sailors Monument. Matzen prided himself on the fact that most of his work was done in open competition. He taught carving, modeling, designing, and casting at the Cleveland School of Art from 1886 until his retirement in 1926. He died in Cleveland at the age of seventy-six in 1938.

Established in 1929, the Herman N. Matzen Scholarship in Sculpture provided funds to a graduating Cleveland Institute of Art senior in sculpture to study in Europe. Little is known about the scholarship other than its recipients. The first awardee, Hughlette "Tex" Wheeler, used the scholarship to study in Paris and later went on to become a noted sculptor of wildlife, especially related to Western themes. Marshall Fredericks received the award in 1930, studying throughout Europe and North Africa. In 1931, Charles E. Murphy received the prize. Murphy became a designer of ceramic works as well as a murals, postage stamps and wildlife prints. It appears that after 1931, the scholarship ceased to be awarded. The reason for this is unknown. One can speculate that the ongoing Great Depression may have played a role in its demise.