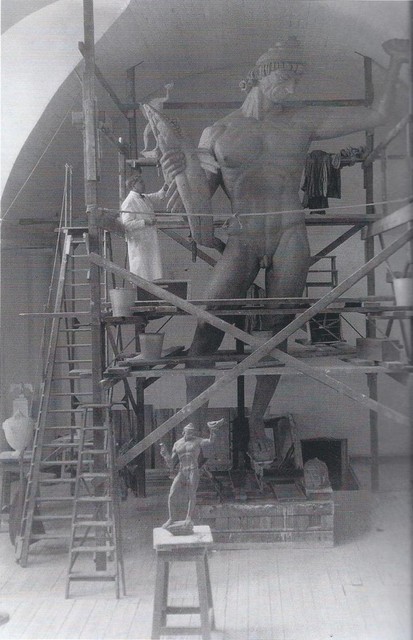 In the excerpt below, Fredericks recounts his first meeting with his mentor and lifelong friend, the sculptor Carl Milles.

… I saw the great sculptor, Carl Milles. It is clear to me as though it were transpiring before my very eyes. I had to work hard to get to art school and work even harder after I got there to stay in school. It was a good school, the Cleveland School of Art; it has a broad curriculum. I tried everything they had; we were required to.

I seemed to have a certain talent for almost every one of the media, but as time went on, I become more and more interested in sculpture and the three-dimensional arts, and concentrated from then on with that. Of course, in the study of sculpture, I became aware of great sculptors throughout the world, one of them being Carl Milles in Sweden, among other Scandinavian sculptors. But he stood out, and I collected quite a little portfolio of photographs and articles about him which I treasured and reread and reread.

Finally, after four years of art school, I was fortunate in winning the one, sole traveling fellowship which gave me $1,000 and allowed me to go to Europe. I was very young, naive and innocent. I had seen very little, traveled very little and done very little. But I had a great desire to learn, and I was anxious to get as much out of life as I could. And so, as soon as school was over, I started out with very little preparation, really , but just the desire to learn and become a sculptor myself.

I set out directly for Stockholm, Sweden, via the old Drottningholm ship which took two weeks to get to Stockholm. It was very exciting travel, of course, and I met people I never believed I would ever meet. I finally got to Sweden and went immediately to the Royal Academy where I had read that Mr. Milles had been teaching. It was a Saturday, but I couldn’t wait until Monday. I went there anyway. No one was in the Academy but the watchman, but he let me in and I asked him if I could see Mr. Milles. He spoke very little English and I had only a smattering of Scandinavian languages, but we communicated well. He told me that Carl had not taught for five years–he was too busy. But he said he would call him on the phone and tell him I was there and we could speak together. He realized that I had felt very lost, that I was sort of heartbroken, that I had come a long way expecting to enroll in school and now, there was no school. So he called Carl on the phone.

I call him Carl now, but I never did all the years I knew him. I respected him so much that I always called him Mr. Milles. He used to tease me about it. But, anyway, he came on the phone and was so sensitive and considerate. He asked me immediately to come out on a streetcar to Lidingo and see him in his home. This is, of course, far more than I had ever imagined I could do. But I did. I got on a streetcar and went out to Lidingo and walked from the streetcar across the bridge and over to his marvelous gardens. It had a big wrought iron gate which he had designed. Beautiful, terribly impressive, the most exciting entrance to any place I had ever seen. I rang the bell and a man came to the gate and had been anticipating my arrival and told me to follow him. So he took me through some byways through the garden and finally into an entrance. He said Mr. Milles is in there, that is his atelier. He told me to go in, which I did. It was quite a large studio, quite high and spacious, filled with many things. It was a little hard for me to see at first, but then I realized at the other end were some scaffoldings and up on the top of this scaffolding, working on a gigantic clay figure, the central figure for the Poseidon Fountain in Gothenberg, was Carl Milles.